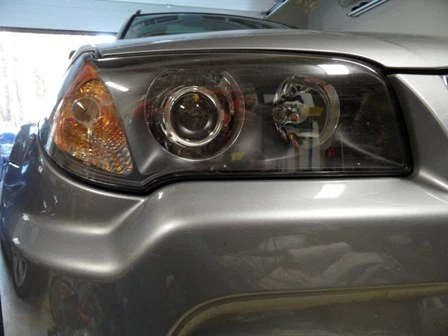 A xenon HID (high-intensity discharge) projector beam headlight upgrade is a huge step up from the stock halogen systems found in most vehicles. While the task is time consuming, it is nowhere as difficult as it appears.

Note: Although the procedure shown here is specific to a 2006 BMW X3, the process followed is generally applicable to any vehicle, especially those steps where the headlights themselves are modified.

Tools: No specialty tools required. Tools will vary based on vehicle.
Time: 6 hours
Difficulty: Moderately hard (No step is actually all that bad, there is just a lot you need to do.)

To say that the standard halogen headlights in our BMW X3 were horrible would be an understatement. The beams were weak and the light pattern produced dismal. On low beam, you would out drive the area illuminated, even when in town. On the highway, forget about it. Installing brighter halogen bulbs helped the light intensity a little but not the coverage area. A better solution was needed.

The X3 does not have a sales volume anywhere near some of the BMW sedans. As a result, no aftermarket headlights are available. Xenon projector beam headlights were an expensive option on the X3. Even used parts for these headlights are prohibitively expensive ($1000+ for used) and do not lend themselves to an easy retrofit.

You can purchase xenon bulb kits to install in the existing halogen reflector headlight assemblies, but these are considered dangerous – the super bright bulbs in an unfocused reflector can blind oncoming traffic and get you a ticket. The bulb kits are not cheap either – over $100 by the time you get done with all the parts needed. That’s a lot to spend for limited improvement that could get you in trouble with the police.

Xenon projector kits are the answer!
A retrofit kit that includes a xenon bulb within a projector beam housing provides the best solution. This setup replicates the same method used in a stock xenon projector beam headlamp at a much lower price. The end result is a set of headlights that look stock and illuminate significantly better than halogens.

Note: Projector beam headlights, particularly xenon, produce a much different illumination pattern than the reflector headlights on most vehicles. In particular, they are characterized by a distinct cutoff line. It takes getting used to. Some people do not like them. Look into it and make sure they fit your preferences before retrofitting, because it is a one way trip.

Installing a bi-xenon projector beam kit
I’ve broken up the following procedure into five sections, in an attempt to best serve both BMW X3 owners and the owners of other vehicles that might be using this procedure as a reference.

Remove BMW X3 headlights
You will be tempted to try and remove the headlights without taking apart the entire front of the car. Take it from me, this is not possible. Save some time and follow the procedure, as given.
Note: This procedure is specific to a 2006 BMW X3 with the optional M Technic aerodynamic kit. The process for other vehicles will vary.
To remove the headlights from a BMW X3, complete the following steps (save all parts and hardware for later use):

The fully disassembled X3 front end is a bit scary!

Retrofit headlights with bi-xenon projector beam kit
Note: Procedure for BMW X3 headlights is shown. The process for your vehicle will vary slightly.
To retrofit headlights with bi-xenon projectors, complete the following steps after removing the headlights from your vehicle.
Note: Avoid handling headlight reflectors and projector shrouds to prevent fingerprints. If you touch the glass on any of the halogen or xenon bulbs, clean thoroughly with alcohol wipes to avoid premature bulb failure.

Bulb retrofit is complete. Headlight assemblies are ready to re-install in vehicle.

Install BMW X3 headlights
Note: This procedure is specific to a 2006 BMW X3 with the optional M Technic aerodynamic kit. The process for your vehicle will vary.
To install the headlights in a BMW X3, complete the following steps:

Adjust headlights
When properly installed, the projector units seat inside the low beam reflectors of your old headlights should be in very close alignment with the original headlights. We also attempted to install the headlights in the vehicle in a near original position. With luck, minimal adjustment will be required.

Projector beam headlights are characterized by a pattern that has a distinct upper cutoff. You might need to adjust the pattern so that the upper edge does not blind oncoming traffic while illuminating the proper distance in front of your vehicle.

Note: Some municipalities require that headlights be aimed by a professional. Please consider local laws before aiming your own headlights.

Most headlights are aimed using two screws, one controlling up/down and the other right/left alignment. Use care when moving the screws! If you force them, they can easily break ruining your headlight! A little goes a long way when adjusting headlights, so make your changes in small increments.

If you are unable to get the headlight illumination pattern in the right place using the adjustment screws, some additional movement can be attained by loosening the two front Torx-head screws that secure the headlight and moving the entire headlight assembly slightly.

I hope that you found this posting illuminating!